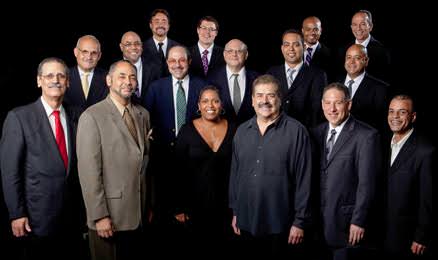 A TRIBUTE TO THE BIG LATIN BANDS

Featuring the MACHITO ORCHESTRA and the MAMBO LEGENDS ORCHESTRA

Lehman Center for the Performing Arts is excited to kick off their 35th ANNIVERSARY SEASON with A TRIBUTE TO THE BIG BANDS featuring the legendary MACHITO ORCHESTRA under the direction of Machito’s son Mario Grillo, and the MAMBO LEGENDS ORCHESTRA led by John “Dandy” Rodriguez, Musical Director Jose Madera and Mitch Frohman. With special guests master percussionist Giovanni Hidalgo, Cuban piano virtuoso Emilio Morales and the master of the Cuban Tres Guitar Nelson Gonzalez on Saturday, September 19th, 2015 at 8pm.  Produced by Lehman Center and Robert Sancho.

Lehman Center for the Performing Arts is on the campus of Lehman College/CUNY at 250 Bedford Park Boulevard West, Bronx, NY 10468. Tickets for A TRIBUTE TO THE BIG BANDS on Saturday, September 19th, 2015 at 8pm are $60, $55, and $45 and can be purchased by calling the Lehman Center box office at 718-960-8833 (Monday through Friday, 10am–5pm, and beginning at 12 noon on the day of the concert), or through online access at www.LehmanCenter.org .   Lehman Center is accessible by #4 or D train to Bedford Park Blvd. and is off the Saw Mill River Parkway and the Major Deegan Expressway. Low-cost on-site parking available for $5.

The MACHITO ORCHESTRA was founded in New York City in 1939 by Cuban vocalist and maracas player Frank “Machito” Grillo who had emigrated to America in 1937 as a vocalist with La Estrella Habanera. Saxophone and trumpet player Mario Bauza joined the band in 1940 as musical director, a position he would hold for 35 years. Initially named the Afro-Cubans, they revolutionized Latin music with their fusion of Afro-Cuban rhythms and big band jazz arrangements, and their wildly successful Latin Nights launched the legendary Palladium Ballroom. One of the city’s most popular orchestras for decades, the band included a “who’s who” guest list of musicians including Dizzy Gillespie, Charlie Parker, Buddy Rich, Cannonball Adderly, Lew Soloff and Jon Faddis. The band made numerous recordings from the 40’s to the 80’s, many with Machito’s sister Graciela also providing vocals. The band’s 1943 hit “Tanga” is considered one of the first Afro-Cuban tunes to be recorded. Machito’s percussionist son Mario Grillo, known as “Machito, Jr.”, joined the band in 1975 for its recording with Dizzy Gillespie Afro-Cuban Jazz Moods, which earned a Grammy nomination. In 1977 Mario Grillo took over as musical director and the band earned a second Grammy nomination for the album Fireworks that featured Lalo Rodriguez as co-lead singer. Changing their name to Machito & His Salsa Big Band, Machito’s daughter Paula Grillo replaced Graciela on female lead vocals. In 1983, their album Machito & His Salsa Big Band ’82 won the 1983 Best Latin Grammy Award. Despite Machito’s death the the Machito Orchestra remains at the vanguard of Latin Afro-Cuban music.

The MAMBO LEGENDS ORCHESTRA was created in 2000 by former members of the Tito Puente Orchestra, led by John “Dandy” Rodriquez, , Musical Director Jose Madera and Mitch Frohman. Famed bongocero John “Dandy” Rodriguez began performing as a teenager with Tito Rodriguez and played with Ray Barretto and Típica ’73 in the ‘70s before beginning his 27-year stint playing bongos in Tito Puente’s band. Bronx native Mitch Frohman was the sax and flute soloist with the Tito Puente Orchestra for 25 years and has also played and recorded with such famed Latin artists Eddie and Charlie Palmieri, Paquito D’Rivera, Chico O’Farrill and the Grammy-winning Spanish Harlem Orchestra. Musical director, timbalero and arranger Jose Madera started playing timbales with Machito as a teenager and was the first musical director for the Machito Orchestra. He was Tito Puente’s conguero for 30 years, his musical director for ten years, the staff arranger at Fania records since the 1970’s and has performed on over 100 recordings by Latin, pop, R&B and jazz artists. The Mambo Legends Orchestra is dedicated to keeping the ‘50s and ‘60s Palladium-era sound alive as it explores new musical concepts. Their latest release, Watch Out! ¡Ten Cuidao! (2011) was nominated for the Latin Grammy Award for Best Salsa Album and they are featured in the 2013 documentary film “For the Love of the Mambo.”

GIOVANNI HIDALGO aka “Mañenguito” was born in San Juan, Puerto Rico in 1963 and is widely recognized as one of the greatest percussionists of all time. Born into a family of drummers (his father and grandfather were both renown professional percussionists), he received his first conga at age eight and developed an incredible lightning-fast technique of hand drumming. Joining the Batacumbele Band gave him the opportunity to travel to Cuba in 1981 where he met José Luis Quintana “Changuito” and together they developed a unique style of Latin Music rhythm. Hidalgo performed for many years with Eddie Palmieri before joining Dizzy Gillaspie’s United Nations Jazz Orchstra in 1988. He won Grammy Awards for his performances on Mickey Hart’s 1991 album Planet Drum and Arturo Sandoval’s Danzon (1995) as well as performing or recording with Steve Gadd, Tito Puente, Paul Simon, Phish, Zaperoco, Cassius Khan and Michel Camilo.

EMILIO MORALES is a master pianist who graduated in 1977 from The School of Music at the National Schools of the Arts in Havana, Cuba where he is currently a professor. He has performed world-wide, has worked with the Buena Vista Social Club Project  and Café Vista Alegre Cuban Project (directed by the famous Tres Guitar player Pancho Amat) and frequently accompanies Grammy Award-winner Omara Portuondo, one of Cuba’s leading female vocalists. An accomplished Latin jazz composer and arranger, he is considered one of the most innovative and exciting pianists in Cuba. His latest CD is Con Cierto Tumbao, recorded with his band Los Nuevos Amigos.

NELSON GONZÁLEZ was born in Vega Baja, Puerto Rico in 1947. He developed a love for Afro-Caribbean music at an early age, which continued when his family moved to NYC at age 12, where Nelson began hanging out with Andy and Jerry Gónzalez, participating in their weekly jam sessions. It was Andy that lent Nelson his first Tres Guitar with its unique set of three pairs of double strings. Rising to the formidable challenge of playing this remarkable, most distinctly Cuban instrument, the Puerto Rican Nelson is widely regarded as the foremost master of the Tres Guitar, leading Cachao to dub him the “Ambassador of the Tres”. With a versatility that can range from Afro-Cuban to Salsa to Bolero, he became a member of the seminal bands Orquestra Harlow, Orquestra Revelación (and subsequently developing a close friendship with singer Ismael Miranda) and the groundbreaking Típica ’73 for four years. In a stunning musical career of more than 40 years, Nelson has been featured on seven Grammy-award winning albums, has backed stars such as Paul Simon, Gloria Estefan and Andy Garcia, toured with Cachao, La India, Marc Anthony, the Conga Kings, Rubén Blades, Eddie Palmieri and Danny Rivera.