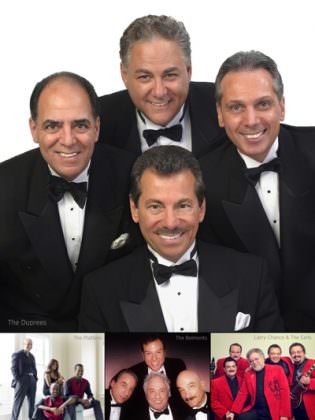 ROCK & ROLL IS HERE TO STAY!

Featuring The Duprees, The Platters, The Belmonts,
Barbara Harris & The Toys, Larry Chance & The Earls and Ragdoll

Lehman Center for the Performing Arts presents the return of New York’s best DOO WOP Show for another night of oldies and fun featuring this timeless music’s leading singers and legendary musical groups on Saturday, January 24th, 2015 at 8pm. The all-star evening of finger-snappin’, foot-tappin’, sing-along classic hits will include THE DUPREES (“You Belong To Me”), THE PLATTERS (“My Prayer”), THE BELMONTS (“Teenager in Love”), BARBARA HARRIS & THE TOYS (“A Lover’s Concerto”), LARRY CHANCE & THE EARLS (“Life is But a Dream”), and RAGDOLL, A Frankie Valli & The Four Seasons Hit Songs Revue (“Sherry,” “Big Girls Don’t Cry” and “I Can’t Take My Eyes Off Of You.”) Hosted by Johnny Z of WFAS 1230AM, Sal Abbatiello of Fever Records and Speedy. DJ Conchi will be playing the classics throughout the night. Produced by Lehman Center and Sal Abbatiello.

Doo Wop emerged from the streets of New York City and Philadelphia and rose as a unique African American vocal style in the mid-1950’s. Doo Wop’s smooth harmonies spread to singing groups of other ethnicities, such as the Capris and The Belmonts. The term “doo wop” was taken from the ad-lib syllables sung in harmony in these songs such as the plaintive “doo-wop” refrain featured in the bridge of The 5 Satins’ “In the Still of the Night”. “Doo Wop” and a range of “oldies” music are celebrated by musicians and audiences worldwide as distinctive American sounds.

Lehman Center for the Performing Arts is on the campus of Lehman College/CUNY at 250 Bedford Park Boulevard West, Bronx, NY 10468. Tickets for DOO WOP  on Saturday, January 24th, 2015 at 8pm are $55, $50, and $45 and can be purchased by calling the Lehman Center box office at 718-960-8833 (Monday through Friday, 10am–5pm and beginning at 12 noon on the day of the concert), or through 24-hour online access at www.LehmanCenter.org. Lehman Center is accessible by #4 or D train to Bedford Park Blvd. and is off the Saw Mill River Parkway and the Major Deegan Expressway. Low-cost on-site parking is available for $5.

The Duprees were formed in the early 1960’s in Jersey City, NJ by five William L. Dickinson High School students. They were discovered by big band leader George Paxton who combined their smooth doo-wop vocal harmonies with a big band backing on their first single, a cover of Jo Stafford’s “You Belong To Me”, which was an instant top-ten hit and million-seller. Thus the sound of the Duprees was born and hits in the same format kept coming throughout the 1960s including “My Own True Love,” “Take Me As I Am,” “Why Don’t You Believe Me,” “Have You Heard,” “Love Eyes,” “It Isn’t Fair” and “Let Them Talk.” Over the years, various members of the band have come and gone, but their unique mixture of doo-wop vocals with big band arrangements has remained. In 2006, the original Duprees were inducted into the Vocal Group Hall of Fame.

The Platters formed in L.A. in 1953 and have had numerous Top 10 hits including “My Own True Love,”  “My Prayer,” “The Magic Touch,” “Twilight Time,” “Harbor Lights,” “To Each His Own” and “If I Didn’t Care.” They have recorded nearly 400 songs, selling over 89 million records and have performed in over 90 countries.  Having appeared in 27 movies, their three songs on the American Graffiti soundtrack “Only You,” “The Great Pretender” and “Smoke Gets in Your Eyes” helped fuel the early 1973’s oldies revival. In 1990, the Platters were inducted into the Rock and Roll Hall of Fame.

The Belmonts were formed by Angelo D’Aleo, Fred Milano and Carlo Mastrangelo, high school buddies from the Arthur Avenue section of the Bronx, naming themselves after the avenue Milano lived. Soon after Dion DiMucci, (also from the neighborhood) joined them, they had their first big hit “I Wonder Why” (1958). This led to multiple television appearances on Dick Clark’s American Bandstand and a string of chart-topping hits including “No One Knows”, “A Teenager in Love”, “When and Where” and “When You Wish Upon A Star”. Even after Dion’s 1960 departure for a solo career, the Belmonts continued to enjoy success, recording classic hit songs like “Tell Me Why” and “Come On Little Angel”.

Barbara Harris and The Toys: Barbara Harris also started singing in her hometown churches, first in North Carolina and later in Queens, New York, where she moved at age 11. In high school, she became part of a group called The Charlettes that did background vocals for recording artists. Changing their name to The Toys, the group released “A Lover’s Concerto” in 1965, a song that took a classical finger exercise from Bach, and put a Motown bass line to it, and sold over a million copies. Their second hit song “Attack” (1966) was followed by “Sealed With A Kiss” in 1968.

Larry Chance & The Earls were a group from the Bronx with a refined doo wop harmony sound that were literally discovered while singing on a street corner. Their first single, “Life is But a Dream” (1961) was a top 10 hit in New York and led to an appearance on Dick Clark’s American Bandstand. They followed up in 1963 with “Remember Then” with its catchy “re-mem-ma-member” bass line which charted at #24 on the Billboard Hot 100, the zippy rocker “Never”, the radio-play favorite “Eyes” and the emotional doo wop standard “I Believe”.

Ragdoll, was formed in 2009 by lead vocalist and falsetto Eddy Rezzonico who grew up in Newark, NJ, the hometown of Frankie Valli and the Four Seasons. Hailed as one of the best Four Season’s tribute bands for their fine harmonies, the band also consists of doo wop musicians Lenny Terri (bass & vocals), David Talbot (guitar & vocals), Anthony D’Antuono (drums & vocals) and Richard Henrickson (keyboards).