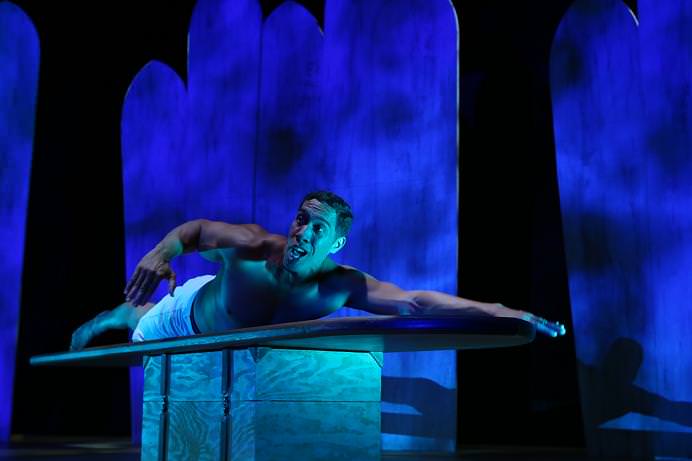 Pregones/Puerto Rican Traveling Theater teams up with acclaimed Hawaiian master artist and storyteller Moses Goods for the New York premiere of DUKE – a tour de force portrayal of Hawaii’s greatest sports hero and grandfather of modern surfing: Duke Paoa Kahanamoku. Directly from Hawaii, playwright/actor Moses Goods brings his acclaimed one-man show to NY audiences for a limited run. DUKE is a feature event of the company’s 21 Islands: A Global Arts Stage for The South Bronx – a new programming and cultural workforce initiative driving economic activity to The South Bronx. Through a kaleidoscope of art, context, and dialogue, 21 ISLANDS shines a spotlight on the islander’s distinct sense of being in the world, defying the perception of ‘island-as-isolation’.

SYNOPSIS: From his first encounter with the ocean as a child to his passion for Hawaiian culture, from the Olympic trials to Hollywood, from a daring surfboard rescue to the romance of Duke falling in love, this one-man show reveals the many faces and phases of the extraordinary champion’s life in an adventurous wave of drama and heroism. Born in Honolulu in 1890, Duke Paoa Kahanamoku was a celebrated U.S. Olympic swimmer, pioneer surfer, actor, and hero to many Hawaiians. Moses Goods’ DUKE is a journey of discovery through the inspiring life of Hawaii’s greatest athlete and unquestionably one of the most important and beloved figures in sports history. A Family audiences feature. IN THE BRONX! Directed by John Signor, with music by Honybal Sosa, sound design by Sam Willis, and lighting design by Chesley Cannon.