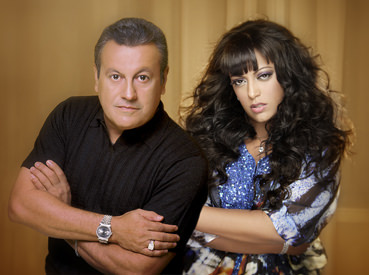 Lehman Center for the Performing Arts brings together for the first time to celebrate Valentine’s Day, La Princesca de la Salsa, INDIA, and El Niño Bonito, ISMAEL MIRANDA  for ENAMORADOS, A SPECIAL CONCERT FOR “La Casa De La Salsa” on Saturday, February 7th, 2015 at 8pm. Produced by Lehman Center and José Raposo. Lehman Center for the Performing Arts is on the campus of Lehman College/CUNY at 250 Bedford Park Boulevard West, Bronx, NY 10468.  Tickets for ENAMORADOS: INDIA & ISMAEL MIRANDA on Saturday, February 7th, 2015 at 8pm are $65, $55, and $50 and can be purchased by calling the Lehman Center box office at 718-960-8833 (Monday through Thursday, 10am–5pm, and beginning at 12 noon on the day of the concert), or through online access at www.LehmanCenter.org. Lehman Center is accessible by #4 or D train to Bedford Park Blvd. and is off the Saw Mill River Parkway and the Major Deegan Expressway.  Low-cost on-site parking available for $5.

ISMAEL MIRANDA, the most recorded Salsa singer in the world, was born in 1950 in Puerto Rico and grew up in Manhattan’s East Village. He showed an interest in music from a very young age and by the time he was eleven, he was singing and playing the congas with two juvenile groups. He recorded his first hit single, “Rumbón Melón”, with Joey Pastrana’s Orchestra when he was 17, which led to being hired as lead singer by bandleader Larry Harlow. Together they co-authored the Latin Boogaloo album El Exigenta (1967), and Miranda headlined the record Orquesta Harlow Presenta a Ismael Miranda in 1968. Over the next five years, he made seven albums with Orchestra Harlow which included many of his original compositions. Miranda also began performing and recording with the newly formed Fania All-Stars in 1969, and as the youngest artist in the group, he was given the nickname “El niño bonito de la Salsa” (The pretty boy of Salsa). He sang on 17 of their albums and appeared with them in the movies “Our Latin Thing” (Nuestra Cosa; 1972), “Live In Africa” (1974) and “Salsa” (1976). In 1973, along with Frankie Rodriguez, Joe Santiago, Nicky Marrero, Nelson González and Oscar Hernández he formed his own band, the Orquesta Revelación, and released the Salsa masterpiece album Asi Se Compone Un Son. Notable Orquesta Revelación album recordings include En Fa Menor (1976), Con Mi Viejo (1976), No Voy Al Festival (1977) and Doble Energia (with Willie Colon, 1980). Several of his hit songs have attained classic status, including “Arsenio”, “Pa Brovo Yo”, “Señor Sereno”, “Lupe, Lupe” and “Se Fue Y Me Dejo”. Even though Miranda has been singing for over 45 years, his voice has retained its resounding strength and melodious qualities. He has been honored with three GRAMMY nominations, 1 platinum  and 8 gold albums, and countless international honors. His most recent recording, A Man and His Music: El Nino Bonito was released in 2012. Recently Miranda has been recording and performing worldwide with the Salsa Giants and also released in September 2014 his 41st album, Son 45, which features collaborations with Bobby Valentin, Richie Ray and Roberto Roena.

INDIA was born in 1970 in Rio Piedras, Puerto Rico and grew up in the La Candela section of the South Bronx listening to recordings of Celia Cruz and Ella Fitzgerald. Discovered at age 15, she reached #1 on the Billboard Dance charts with hits like “Love and Happiness.” In 1992, Eddie Palmieri came to the studio to hear her for himself. When they recorded the amazingly popular Llegó La India via Eddie Palmieri, “The Princess of Salsa” had arrived in the world of Latin music. In 1994 she released her record-breaking album Dicen que Soy, which went quadruple platinum in the US and Puerto Rico. India soon had a string of number 1 singles on the Billboard Tropical chart: “Nunca Voy a Olvidarte” (1994), “Ese Hombre” (1994), “Mi Mayor Venganza” (1998), “Seduceme” (2003), “Traicion” (2003) and “Ya No Queda Nada” (2005). With three GRAMMY® nominations and two Latin GRAMMY nominations, India performed on Jazzin’, the hit album with Tito Puente and the Count Basie Orchestra, and Combinación Perfecta, featuring her duet “Vivir lo Nuestro” with Marc Anthony. The 2007 Latin Billboard Awards honored her with Best Female Tropical Album of the Year for Soy Diferente and Latin Dance Club Play Track of the Year for “Solamente una Noche.” In 2010 she released her ninth studio album, Unica, and her single “Estúpida,” hit #1 on the tropical Billboard charts. In 2011, she released “Tacalacateo” as a collaboration with DJ Peppe Citarella which peaked at #13 on the Billboard dance chart. India was a guest artist on arranger Tony Succar’s 2012 production UNITY: The Latin Tribute to Michael Jackson and in 2014 she joined Ismael Miranda and the Salsa Giants to record “Bajo la Tormento”. She is currently working on a new album contracted to be released by Sergio George’s Top Stop Records.