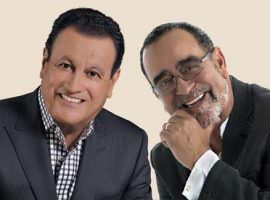 Lehman Center for the Performing Arts is proud to present Two Living Salsa Legends, the multifaceted vocalists ISMAEL MIRANDA and ANDY MONTAÑEZ as they perform selections from their vast repertoires on Saturday, March 19th, 2016 at 8pm.  Produced by Lehman Center and Leo Tizol.

Lehman Center for the Performing Arts is on the campus of Lehman College/CUNY at 250 Bedford Park Boulevard West, Bronx, NY 10468.  Tickets for ISMAEL MIRANDA and ANDY MONTAÑEZ on Saturday, March 19th, 2016 at 8pm are $65, $55, $50 and can be purchased by calling the Lehman Center box office at 718-960-8833 (Monday through Friday, 10am–5pm, and beginning at 12 noon on the day of the concert), or through online access at www.LehmanCenter.org.  Lehman Center is accessible by #4 or D train to Bedford Park Blvd. and is off the Saw Mill River Parkway and the Major Deegan Expressway.  Low-cost on-site parking available for $5.

ISMAEL MIRANDA, the most recorded Salsa singer in the world, was born in 1950 in Puerto Rico and grew up in Manhattan’s East Village. He showed an interest in music from a very young age and by the time he was eleven, he was singing and playing the congas with two juvenile groups. He recorded his first hit single, “Rumbón Melón”, with Joey Pastrana’s Orchestra when he was 17, which led to being hired as lead singer by bandleader Larry Harlow. Together they co-authored the Latin Boogaloo album El Exigenta (1967), and Miranda headlined the record Orquesta Harlow Presenta a Ismael Miranda in 1968. Over the next five years, he made seven albums with Orchestra Harlow which included many of his original compositions such as “La Revolución”, “El Malecón” and “Lamento Cubano”.. Miranda also began performing and recording with the newly formed Fania All-Stars in 1969, and as the youngest artist in the group, he was given the nickname “El niño bonito de la Salsa” (The pretty boy of Salsa). Miranda sang on 17 of their albums and appeared with them in the movies “Our Latin Thing” (Nuestra Cosa; 1972), “Live In Africa” (1974) and “Salsa” (1976). In 1973, along with Frankie Rodriguez, Joe Santiago, Nicky Marrero, Nelson González and Oscar Hernández he formed his own band, the Orquesta Revelación, and released the Salsa masterpiece album Así Se Compone Un Son. Notable Orquesta Revelación album recordings include En Fa Menor (1976), Con Mi Viejo (1976), No Voy Al Festival (1977) and Doble Energia (with Willie Colon, 1980). Several of his hit songs have attained classic status, including “Arsenio”, “Pa Brovo Yo”, “Señor Sereno”, “Lupe, Lupe” and “Se Fue Y Me Dejo”. Even though Miranda has been singing for over 45 years, his voice has retained its resounding strength and melodious qualities. He has been honored with three GRAMMY nominations, 1 platinum  and 8 gold albums, and countless international honors. 2012 saw the release of A Man and His Music: El Nino Bonito and he has also been recording and performing worldwide with the Salsa Giants. In September 2014 Miranda released his 41st album, Son 45, which features collaborations with Bobby Valentin, Richie Ray and Roberto Roena. The album’s title track rose to the number one spot on the Billboard Tropical Songs chart.

ANDY MONTAÑEZ, nicknamed “El Godfather de la Salsa” and known for his rich, powerful vocals, was born in San Juan, Puerto Rico. He gained international popularity during his 15-year tenure (1962-1976) as lead vocalist of the legendary salsa group El Gran Combo, producing 37 albums that included such hit songs as “Hojas Blancas”, “Un Verano en Nueva York”, “El Barbero Loco”, “El Swing”, “Julia” and “Vagabundo”. In 1977 he replaced Oscar D’León in the popular Venezuelan orchestra La Dimension Latina, recording eight albums in three and a half years that included hits like “El Eco del Tambor” and “Ave María Lola”. During this same period, Montañez contributed vocals to the three superb Puerto Rico All Stars salsa albums Puerto Rico All Stars (1977), Los Profesionales (1978) which included his soulful rendition of “Aqui En Mi Pueblo”, and 1979’s Tribute to Messiah which was dedicated to Eddie Palmieri. In 1980, Montañez formed his own orchestra in Puerto Rico and released the popular album Salsa Con Caché. 1981 to 1984 was a very prolific period that saw five new album releases including 1984’s Versátil with hits like “Qui, Qui” and “Villaran Cuenca”. 1985’s Andy Montañez was a game changer not only because it was on the Billboard Tropical chart for 30 weeks, reaching number 2 with hits like “Genio y Figura”, “Payaso” and “Dulce Veneno”, but because it was the first of many albums that would featured Andy’s sons Andy Jr. and Harold singing coro. Following up with two additional chart topping albums 1987’s Mejor Acompañado Que Nunca (#2) and 1988’s  El Eterno Enamorado (#4), Montañez secured his place amongst the legends of Salsa. Throughout the 90’s he continued to record one successful album after another, earning his orchestra the nickname “Dynasty Montañez” when his daughter Ednaliz joined the chorus. During this period, he also recorded three albums of boleros and Bohemian songs with fellow Salsa great Ismael Miranda: Al Son del Bolero (1996), Romantics de Nuevo (1997) and Con Alma de Niño (1998). In 2005, he again joined up with Ismael Miranda to record the hit song “Se Fue Y Me Dejo”. Montañez (with Pablo Milanes) won the 2006 Latin GRAMMY Award for Best Traditional Tropical Album for AM/PM Lineas Paralelas. Also in 2006, he released Salsa Con Reggaeton hitting #2 on both the Tropical and Latin Tropical album charts. 2007’s hard hitting salsa album El Godfather De La Salsa was also a success. The 2010 El Gran Combo tribute album, De Andy Montañez Al Combo that featured new arrangements of the hit songs “Brujeria”, “No Hago Más Ná” and “Carbonerito” rose to number 5 on the Billboard Latin Tropical chart. In 2014, Andy, with the roots group Viento de Agua, contributed the song “Cortaron a Elena/Santa María” to the album and film Que Lindo es Puerto Rico that highlights the natural beauty and musical heritage of the island of his birth.