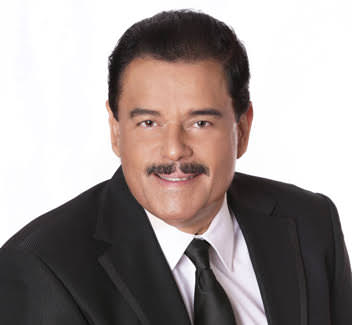 One Night Only! LALO RODRIGUEZ In CONCERT + More

With His 17-Piece All Star Orchestra Conducted by Manuel Garcia

Lehman Center for the Performing Arts continues to celebrate their 35th Anniversary Season by inviting you to Feel the Soul of Salsa with the Two-Time Grammy Award Winner LALO RODRIGUEZ as he performs his greatest hits with spectacular Las Vegas-style staging in celebration of the 40th Anniversary of his incredible musical career on Saturday, November 21st, 2015 at 8pm. With special guests Johnny Olivo Jr. & Herencia de Plena and El Trio Ideal. Produced by Lehman Center and Leo Tizol.

Lehman Center for the Performing Arts is on the campus of Lehman College/CUNY at 250 Bedford Park Boulevard West, Bronx, NY 10468. Tickets for LALO RODRIGUEZ on Saturday, November 21st, 2015 at 8pm are $60, $55, and $45 and can be purchased by calling the Lehman Center box office at 718-960-8833 (Monday through Friday, 10am–5pm, and beginning at 12 noon on the day of the concert), or through online access at www.LehmanCenter.org.  Lehman Center is accessible by #4 or D train to Bedford Park Blvd. and is off the Saw Mill River Parkway and the Major Deegan Expressway. Low-cost on-site parking available for $5.

LALO RODRIGUEZ, is one of the most internationally recognized Latin artists of the last four decades. A prolific singer, songwriter, composer and producer, he has sold millions of records and has been honored with numerous awards, including two Grammys, Premio Lo Nuestro and Latin Billboard Music Awards. Known for his charismatic stage presence, Rodriguez was born in 1958 in Santurce, Puerto Rico and began singing when he was twelve years old. Revered as the “Pride of Puerto Rico”, he made his recording debut at age 16 as the lead singer and composer of “Deseo Salvaje” on Eddie Palmieri’s The Sun of Latin Music (1974), the first Latin album to win a Grammy Award. In 1976, Rodriguez was the featured vocalist on the classic Eddie Palmieri Orchestra recording Unfinished Masterpiece, which also garnered a Grammy Award. That same year his finely tuned voice was showcased with the Tommy Olivencia Orchestra on the Diplo Award-winning Introducing Lalo Rodriguez and Simón Pérez, which also included his compositions “Vengo Del Monte”, “Montuno Sabroso” and “Hoy No Me Recuerdas”. In 1977, he appeared as co-lead singer and composer of three powerful, yet sensitive tunes, “Mi Ritmo Llego”, “Desilucion” and “Guaguanco a Mexico” on Machito’s Grammy nominated album Fireworks. Lalo performed and recorded with the Puerto Rico All Stars from 1977 through 1979, composing the Grammy-nominated songs “Alianza De Generales” and “Oyelo Que Te Conviene”. Going solo in 1980, he won the Diplo Award for Singer of the Year, releasing his first album Simplemente…Lalo which remains his most famous, having launched a new era in Puerto Rican salsa and featured the hit “Tu No Sabes Querer”. Rodriguez had two additional popular salsa records in the 1980’s before releasing his number one Billboard chart topping album Un Nuevo Despertar in 1988. Recorded in the salsa romántica style, this record featured the now classic songs “Si, Te Menti,” “Despues De Hacer El Amor” and his famous smash hit “Ven Devórame Otra Vez” which was awarded “Tropical Song of the Year” at the Lo Nuestro Awards in 1989. Lalo has continued to record and perform and has just completed a new album of eleven original compositions recorded in the style of traditional salsa with a large orchestra and chorus.

JOHNNY OLIVO Jr. & HERENCIA de PLENA’s orchestra specializes in Puerto Rican Plena music, a rhythm-driven, percussion-focused tradition of popular music, chant and dance that originated in Ponce, Puerto Rico at the beginning of the 19th century and is native to the barrios and costal zones of the island.