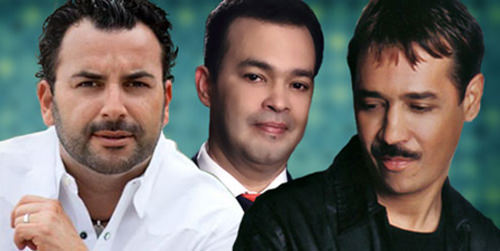 Lehman Center for the Performing Arts is happy to present a special concert to celebrate the Valentine season, LOVE IN SALSA & MERENGUE with salsa romántica singer EDDIE SANTIAGO, ALEX BUENO, “the most tender voice of merengue” and for the first time in New York, merengue and bachata vocalist JOSEPH FONESCA on Saturday, February 20th, 2016 at 8pm.

Lehman Center for the Performing Arts is on the campus of Lehman College/CUNY at 250 Bedford Park Boulevard West, Bronx, NY 10468. Tickets for the LOVE IN SALSA & MERENGUE on Saturday, February 20th, 2016 at 8pm are $65, $55, and $50 and can be purchased by calling the Lehman Center box office at 718-960-8833 (Monday through Friday, 10am–5pm and beginning at 12 noon on the day of the concert), or through 24-hour online access at www.LehmanCenter.org. Lehman Center is accessible by #4 or D train to Bedford Park Blvd. and is off the Saw Mill River Parkway and the Major Deegan Expressway. Low-cost on-site parking is available for $5.

EDDIE SANTIAGO, born in Toa Alta, Puerto Rico, began performing at a young age and spent two years with El Conjunto Chaney, singing the band’s hit “Detalles.” Going solo and forming his own band in 1986, he gained international acclaim with “Lluvia,” which went to the top of the charts and helped spawn the Tropical music sub-genre of salsa romántica. His success continued with such hits as “Tu me quemas,” “Antídoto y veneno,” “Que locura enamorarme de tí,” and “Insaciable.” Between the mid-‘80s and the early ‘90s, six of Santiago’s albums reached #1 on the Tropical music charts. His romantic lyrics combined with his sensual interpretation and melodious voice has made him one of the most popular salseros of all time.  He has released over 25 albums, many of which have gone gold and platinum. In 1999 he released Celebration: Epic Duets, joined by Latin music stars Victor Manuelle, Huey Dunbar and Elvis Crespo. The album was named one of the best recordings of 1999 by the National Foundation for Popular Culture.  His 2004 CD Después del silencio, nominated for a GRAMMY in the Tropical Music” category, produced five radio hits: “Loco por tu amor,” “No me hables mal de ella,” “Falsa,” “Todavía hay swing” and “Llover sobre mojado.” Santiago’s latest CD is 2011’s Reyes de la Salsa with Lalo Rodríguez.

ALEX BUENO, “the most tender voice of merengue,” was born in San José de las Matas, Dominican Republic in 1963.  He began singing and playing guitar at a very young age, recording in 1978 his first two songs “Quisqueya” and “Condiciones” with the Santo Domingo All Star Band led by Gerardo Veras. Sharing vocals with Fernandito Villalona, Bueno recorded the hit “Piel Canela“ in 1980. Leaving the All Star Band in 1982, he became the lead singer of the merengue band La Orquesta Liberacion and recorded the critically acclaimed album Alex & Orquesta Liberacion which contained the hits “Querida”, “La Radio”, “Que Cara Mas Bonita” and “Colegiada”. He had three additional hit merengue songs the following year. In 1990, he released his first salsa album, the popular release Jardin Prohibido and followed up in 1992 with Ternuras, which broke sales records. After releasing three more successful salsa albums, Bueno switched to bachata, earning a Premios Lo Nuestro nomination for Corazon Duro (2001), the second of his six bachata records. In 2013, Alex moved to New York City and will be releasing a new album in 2016.

JOSEPH FONESCA, Puerto Rican singer/songwriter, got his start with the extremely popular merengue dance band Los Sabrosos del Merengue in the mid-1990’s, becoming famous for singing “No Iloraré” and “Escúchame”. Going solo in 2000, he released his debut album Noches de Fantasia featuring the hit salsa single “Jardín Prohibido” and the Tropical up-tempo “Bomba”. In the next seven years, Fonesca recorded five additional chart-topping merengue records including 2002’s Escuchame which reached #8 on the Billboard Tropical/Salsa chart with the hit “Que Levante La Mano” and the #5 Billboard Top Tropical album Adios Amor (2005) that highlighted the range of Fonesca’s pure and captivating voice on songs like the hit “Por Tu Amor”. Switching styles in 2009, he released Amante Bachata, comprised almost entirely of bachatas and recorded in the Dominican Republic with collaborators Víctor Víctor and Junior Cabrera. It charted at #3 and featured songs like “Te Llevo Dentro”, “Amor Sideral”, “Amante Gaviota” and a merengue version of “Tu Cuerpo”. Returning to the merengue and ballads, 2011’s release Voy a Comerte el Corazón also made it to #3 with the hits “Entre la Tierra y el Cielo” and “Tú Hermana” and the duet ballad with Gisselle, “No Fue Culpa Mía”. The recording also reflects Fonesca’s highly successful ability to entertain his audience through humorous merengues, which is evidenced by his hit song “El Caballito de Palo” which has reached more than 34 million views on YouTube, a record for a merengue. His 2015 release Eso, Eso, Eso is a continuation of that style, filled with charming merengue songs that will make you smile and rhythms you will want to dance to.