MARCH IS MUSIC Celebrates “10 on Walton” 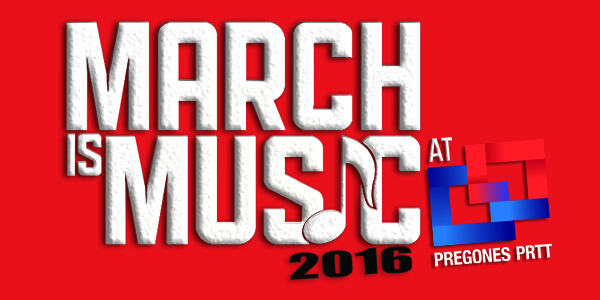 Pregones Theater and Puerto Rican Traveling Theater celebrate an extraordinary decade with the 10th Edition of the MARCH IS MUSIC series, from Wednesday, March 2nd, through Saturday, March 26th, in The Bronx. An amazing, world-class lineup of musical artists delivers one of the most thrilling experiences to be had in all of New York City and the Northeast region: New Music, Latin Jazz, Piano, Percussion, Big Band, Multimedia, and a whole lotta Boogie Down swagger! Limited seating — buy or reserve now! 7 concerts and 7 free events including Meet-The-Artist matinees for all ages scheduled as follows:

MEET-THE-ARTIST MATINEES | FREE and suitable for groups of all ages:

VENUE: All performances are at Pregones Theater, 575 Walton Avenue, between 149th and 150th Streets, south of Yankee Stadium and east of Gateway Mall at Bronx Terminal Market, in The Bronx. SUBWAY: Trains # 2, 4, 5 to 149th & Grand Concourse.

MORE ABOUT THE ARTISTS:

MIVOS QUARTET – “One of America’s most daring and ferocious new-music ensembles” (The Chicago Reader), the Mivos Quartet is dedicated to introducing audiences to new music. The quartet actively commissions and premieres new works, often collaborating with composers like Helmut Lachenmann, Alex Mincek, and Anna Clyne throughout the composition process. Presented in collaboration with Carnegie Hall and the Weill Music Institute’s Neighborhood Concert Series, and in partnership with the First Wednesdays Culture Trolley of Bronx Council on the Arts.

MERAL GUNEYMAN – Turkish born jazz pianist Meral Guneyman’s talents have won her numerous competitions and allowed her to perform around the globe as a soloist and with symphony orchestras in her pursuit in the advancement of contemporary music. Her recording of the Frank Bridge sonata was heralded as among the five best of the year by Fanfare Magazine.  “A pianist to be heard again at the earliest opportunity.” –Paul Hume of The Washington Post “Ms. Guneyman has an imposing technique and a delicate feel for timbre.” –Bernard Holland of The New York Times “Meral Guneyman possesses an exquisite touch, immense power and a formidable technique.” –Peter Quinn of Jazzwise.

STEVEN OQUENDO LATING JAZZ ORCHESTRA (SOLJO) – Formed in 2009, SOLJO is a 19-piece big band comprised of well-seasoned professional musicians hailed from the five boroughs of jazz-rich New York City and beyond. For more than five years, Oquendo and SOLJO have surprised and captivated audiences with their singular take on improvisation, fusion rhythms, and creative arrangements, spinning a 21st Century music for lovers of Afro Cuban and Latin Jazz, Salsa, and Palladium-era Mambo!

CARLOS CUEVAS – Born in England and raised in Venezuela, Cuevas studied music at University of North Texas and the Aaron Copland School of Music at Queens College-CUNY, where was recipient of the prestigious Sir Roland Hanna Memorial Jazz Award. His versatility is tested and proven in a slew of formidable collaborations, including work with NEA Jazz Master Hubert Laws, Bette Midler, Néstor Torres, The Los Angeles Symphonic Jazz Orchestra, and The New York Philharmonic Orchestra of the Americas. He released two albums, Depiction and Uninhibited Realm, to rave reviews from Downbeat, Keyboard, Modern Drummer, and Los Angeles Jazz Scene.

MORE ABOUT US AND OUR PROGRAMS:

PREGONES THEATER and PUERTO RICAN TRAVELING THEATER – Now one and the same company, Pregones/PRTT champions an arts and cultural legacy of universal relevance through creation and performance of original musical theater and plays rooted in Puerto Rican/Latino cultures, and through presentation of other artists who share our twin commitment to the arts and civic enrichment. Our Bronx and Manhattan stages are dynamic, accessible, and growing hubs of creative community. Facebook: pregonestheater Twitter: pregonesprtt Web: www.pregonesprtt.org

MARCH IS MUSIC – Building on a commitment to present artists of the highest caliber in The Bronx, Pregones Theater’s annual, multi-genre series showcases the range and vitality of today’s varied musical cultures. Curated by resident artists, programs draw links between music, dance, and popular culture, highlight ruptures and continuities in style, and make room for intercultural fusion and exchange. Latino musicians share top billing with artists of diverse background, and recurring presenting and commissioning partners include Carnegie Hall, Weill Music Institute, and NPN. The 10th anniversary of March Is Music also harbors activity of its satellite series:

BRONX PIANO SUNDAYS – During and beyond the month of March, BPS shines a spotlight on one of Pregones/PRTT’s prized possessions: our Steinway & Sons grand piano acquired with support from individual donors and Bronx Borough President Rubén Díaz, Jr. Accomplished pianists are invited to perform works of all styles and eras on this magnificent concert hall instrument, custom selected to fit the unique dimensions and acoustic temperature of our Bronx theater. Concerts are presented on Sunday afternoons at 3, and are free of charge to the general public.