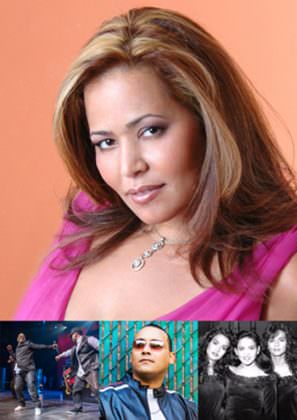 Lehman Center for the Performing Arts in association with Sal Abbatiello of Fever Records presents for the ninth year in a row – FOREVER FREESTYLE 9 – on Saturday, March 7th, 2015 at 8pm.  To Latino teenagers in the late ‘80s and early ‘90s, Freestyle, a hybrid of Hip Hop and disco, was known simply as “Our Music.”  This year’s concert will feature Freestyle artists that made this genre a world-wide sensation, including TKA/K7 “Maria,” JUDY TORRES “No Reason To Cry,” GEORGE LAMOND “Bad Of The Heart,” THE COVER GIRLS “Show Me,” NOEL “Silent Morning,” LISETTE MELENDEZ “Together Forever,” SUGAR HILL GANG “Rapper’s Delight,” ROB BASE “It Takes Two,” SOAVE “Crying Over You,” CORO “Where Are You Tonight My Love” and NOCERRA “Summertime, Summertime.” The concert will also feature DJ LUCHO, DJ SOLO and THE WHITEBOY DJ KYS and will be hosted by SPEEDY and SAL ABBATIELLO.

Lehman Center for the Performing Arts is on the campus of Lehman College/CUNY at 250 Bedford Park Boulevard West, Bronx, NY 10468.  Tickets for FOREVER FREESTYLE 9 on Saturday, March 7th, 2015 at 8pm are $100, $65, $60 and $55 and can be purchased by calling the Lehman Center box office at 718-960-8833 (Monday through Friday, 10am–5pm, and beginning at 12 noon on the day of the concert), or through online access at www.LehmanCenter.org.  Lehman Center is accessible by #4 or D train to Bedford Park Blvd. and is off the Saw Mill River Parkway and the Major Deegan Expressway.  Low-cost on-site parking available for $5.

TKA/K7 is a Latin-influenced Spanish Harlem hip-hop group that garnered success in the early ‘90s with their hit “Come Baby Come.” Other hits include “Maria” (1982), “One Way Love” and “Tears May Fall” (1987), “You Are The One” (1989) and “Louder Than Love.” Led by K7 (Louis “Kayel” Sharpe), the former lead vocalist of the Freestyle super-group TKA, TKA/K7 also features DJ Non-Stop, Prophet, Tre Duece and LOS.

JUDY TORRES, known as the “Queen of Freestyle,” was discovered at age 18 in her hometown of the Bronx and quickly became a star with such hits as “No Reason to Cry” (1986) and “Come Into My Arms” (1987) Her second album produced the hit single “I Love You for All Seasons.” In late 2005, she released popular hit cover of a song by the band Journey titled “Faithfully“. Her most recent release is 2010’s MP3 album Stay.

GEORGE LAMOND began singing back-up for his cousin Joey Kid in the Bronx, teaming up later as Loose Touch. His solo debut was “Bad of the Heart” (1990) which earned him a deal with Columbia. The LP Bad of the Heart yielded two more freestyle hits, “Without You” and “Look into My Eyes.” In 1992, he released his second album, In My Life which included the high-charting single “Where Does That Leave Love.” Lamond also became a Latin superstar when his first Latin single “Si Tu Te Vas” quickly reached the top of the charts. And in 2008, his remix of the classic Journey song “Don’t Stop Believin’” became a big pop hit. Lamond is currently working on a new album slated for release in 2015.

THE COVER GIRLS were formed by Sal Abbatiello, the Fever music promoter and owner of the famed club Disco Fever, after an extensive talent search. Both glamorous and talented, they lit up the domestic and international charts with their first single “Show Me,” followed by “Because of You” and “Wishing on a Star.” Other major hits include “My Heart Skips a Beat” and “We Can’t Go Wrong.” Originally from the Bronx, the group released four albums, selling over 3 million records, with 11 charted singles in a row on Billboard’s Hot 100 singles chart.

NOEL was born in the Bronx of Puerto Rican descent and hit the dance singles charts in 1987 with “Silent Morning” his first Top-10 hit. 1988’s “Like a Child” became his first #1 single. He topped the dance charts again later that year with “Out of Time” and released the hit song “The Question” in 1990.

LISETTE MELENDEZ grew up in East Harlem and in high school formed her first singing group, which led to her discovery by producer Carlos Berrios. Her Fever Records debut, A Day in My Life, made the Hot 100 Album chart and had two Hot 100 singles, including “Together Forever” and “A Day in My Life Without You.”

SUGAR HILL GANG inaugurated the history of recorded hip-hop with the single “Rapper’s Delight,” a multi-platinum-seller and radio hit recorded in 1979 by NY rappers Master Gee, Wonder Mike and Big Bank Hank which sold more than eight million copies. In 1981 the group performed on the TV show Soul Train the hit title track of their second album 8th Wonder which also contained the hit single “Apache.” The trio made a comeback in 1999 with Jump on It, a rap album for children.

ROB BASE is a hip-hop rapper from Harlem in New York City that was born in 1967. His 1988 multi-platinum breakout single “It Takes Two” was recorded with DJ E-Z Rock and uses multiple samples from the James Brown/Lyn Collins song “Think (About It).” As a duo, their second hit song “Joy and Pain” also proved to be a smash the following year. Going solo in 1989, Base released “Turn It Out (Go Base)” which went Gold on the hit dance charts. In 2008, “It Takes Two” was ranked number 37 on VH1’s 100 greatest songs of hip-hop.

SOAVE, who was born Jeffery Martinez in 1968 in Jersey City, NJ of Puerto Rican descent, is best known for his smash Freestyle classic “Crying Over You.” His follow-up hits included “If You Want Me,” “Don’t Look Back” and “Where Did We Go Wrong?”

CORO got his start in the entertainment business playing numerous roles in TV shows such as Miami Vice. He went on to work with pop artist, Stevie B. In 1998, Coro got his big break with the song “Where Are You Tonight,” a huge hit in the U.S., Canada and the U.K., reaching Top-25 on Billboard‘s Club Chart, and #1 on DMA’s Dance Chart. He is also known for his hit dance songs “Can’t Let You Go” (1990) and “My Fallen Angel” (1991).

NOCERRA was born Maria Nocera in 1967 in Sicily, grew up in central Italy and moved to New York City when she was 18 years old. She is best known for her Latin Freestyle hit “Summertime, Summertime” that reached #2 on the Billboard Hot Dance/Club Play chart in 1986. Also included on her debut 1987 album Over The Rainbow was her second big hit “Let’s Go,” which made it to #8 on the same Billboard chart. Additionally, Nocera has sung background vocals for the Freestyle acts Safire, India and Information Society and is a club DJ based in NYC.