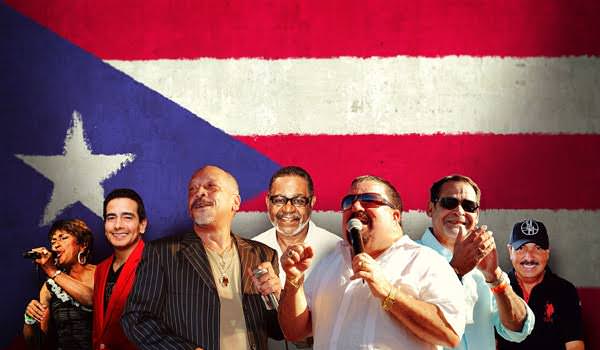 Lehman Center for the Performing Arts is proud to present the return of the PUERTO RICAN MASTERS with Director Isidro Infante featuring three legends of salsa: Ismael Rivera Jr., Pedro Brull and José Mangual Jr., joined on stage by Hector Tricoche and Viti Ruiz of the new generation of salsa with a special appearance by Yolanda Rivera on Saturday, June 4th, 2016 at 8pm. The Puerto Rican Masters are a select group of the greatest stars of classic and contemporary salsa of the last forty years. The Orchestra, led by Maestro Isidro Infante, is composed of some of the best Puerto Rican musicians resident in New York City. Produced by Lehman Center and Leo Tizol.

Lehman Center for the Performing Arts is on the campus of Lehman College/CUNY at 250 Bedford Park Boulevard West, Bronx, NY 10468.  Tickets for PUERTO RICAN MASTERS 2 on Saturday, June 4th, 2016 at 8pm are $65, $55, and $50 and can be purchased by calling the Lehman Center box office at 718-960-8833 (Monday through Friday, 10am–5pm, and beginning at 12 noon on the day of the concert), or through online access at www.LehmanCenter.org.  Lehman Center is accessible by #4 or D train to Bedford Park Blvd. and is off the Saw Mill River Parkway and the Major Deegan Expressway. Low-cost on-site parking available for $5.

ISIDRO INFANTE was born and raised in Old San Juan, Puerto Rico and is a world-renowned producer, arranger, pianist  and composer. Over the course of his multi-faceted career, he has produced more than 450 albums and his projects have been nominated for 47 Grammy Awards, of which he has won seven, and he has been honored with numerous Billboard, Premios Lo Nuestro, Ace and Paoli awards. He has arranged more than 5,000 scores and has composed more than 125 original songs. Infante developed a love of music as a child by listening to his father play the violin. As a teenager, he studied the piano and played in rock/salsa bands before attending the Conservatory of Music of Puerto Rico, where he earned a B.A. in Music in 1973. From 1974 to 1989, Infante worked as a producer, arranger and pianist for Fania Records before leaving to become the President of Marcas Records in 1989. In 1980, he collaborated with Louie Ramirez and Ray de la Paz on the breakthrough album Noche Caliente that featuredsalsa ballads and became the first album of the genre to sell over a million copies. After becoming the A&R Director ofRMM Records in 1992, Infante has had the opportunity to work with just about every major artist in salsa and Latin music, including Tito Puente, Machito, Marc Anthony, Paquito Guzman, Luisto Carrion, Michael Stuart, Celia Cruz, and Johnny Pacheco. In 2009 he became the Musical Director of the Fania All Stars. And in 2015, he produced albums for José Alberto “El Canario”, La India, Raphy Leavit & La Selecta, Roberto Roena, Puerto Rican Power and Juan Gabriel.

PEDRO BRULL was born in Vega Baja, Puerto Rico and is best known for being the lead singer from 1980 to 2004 of the great salsa Orquesta La Mulenze, led by bassist Edwin Morales. During his tenure with the orchestra, they produced a long list of salsa hits and new classics including “Anoche Aprendí”, “Con Pocas Palabras Basta” and “No Te Vayas Todavía”. Known as “The Sonero Heavyweight” not only for his large physical size, but also for the great power of his voice and talent, Brull started his professional career singing with Orquesta Son and Orquesta La Reforma while still in his teens. Later he joined Orquesta Éxodo in 1974, led by trombonist Rubén Colón. In 2005, after recording more than 15 albums with La Mulenze, Brull left the orchestra to begin a solo career, releasing his first album Pronósticos with Gilberto Santa Rosa and Victor Manuelle.

JOSÉ MANGUAL JR., percussionist, composer, producer and singer, was born and raised in “El Barrio”, Spanish Harlem, NY and is the son of famed bongocero José “Buyu” Mangual Sr. As a teenager, he played bongos with local groups. In 1968, Mangual Jr. began playing the bongos and singing backup with the band of Willie Colón, performing and recording until 1984, starting with 1969’s salsa masterpiece Cosa Nuestra. He recorded his first song as lead singer (which he also co-composed), “San Miguel”, in 1970 with Tony Pabón’s band on the self-titled albumLa Protesta. In 1977 he released his first album as a leader, the spectacular Tribure to Chano Pozo, that featuredJimmy Sabater and Mangual Jr.’s brother Luis Mangual on percussion. Voted “Bongocero del Año” in 1978 by New York Latina Magazine, Mangual Jr., went on to record 5 albums for Velvet Records from 1979 to 1982. In the 1980’s, he performed and recorded with a dazzling array of musical superstars including Héctor Lavoe, Ruben Blades, Herb Albert, Dizzy Gillespie, Celia Cruz, Ismael Miranda, Louie Ramirez and the Fania All-Stars. Continuing to record during the 90’s, he released his incredible Tribute to Chano Pozo Vol. II in 1995. Forming the salsa/mambo bandSon Boricua in 1998, his band won three New York Latin Critics’ ACE Awards for the albums they released in 1999, 2000 and 2002. Recently, José has been performing with the band of his brother, Luis Mangual Y Su Conjunto Mangual, releasing Fuego Fire Candela (2006), Abril En Paris (2007) and Sabor Y Swing (2012).

HECTOR TRIOCHE, one of Puerto Rico’s original Salsa Kings, is praised for combining a high, harmonious voice with the creativity of an improvisation artist. He was first recorded in 1982 on the album Por Todas Partes with Joe Rodríguez‘ band La Terrifica. His big break came two years later when he began singing with Tommy Olivencia’s orchestra La Primerísima, sharing the stage with Frankie Ruiz and Paquito Guzmán. Trioche was the lead singer on the orchestra’s hits “Doce Rosas”, “Lobo Domesticado”, “Periquito Pin Pin”, “No me Tires la Primera Piedra” and “No Soy Automático”. In 1990 he left the band to pursue a solo career, releasing nine albums in the U.S and his many hits include “Hacer el Amor”, “Macho Pérez”, “A Corazón Abierto” and “Ese Soy Yo”. In 1996, he recorded with the Puerto Rico All Stars on the reunion album De Regreso.

VITI RUIZ is a salsa singer that was born in New Jersey and raised in Mayagüez, Puerto Rico. At age sixteen he was first recorded singing on the song “El Estudiante” with the Orquesta Panamericana. In 1986, he joined the chorus of the orchestra led by his brother, the salsa singer Frankie Ruiz who is affectionately known as El Papá de la Salsa. In 1989 he recorded his first album Sedúceme which rose to #8 on the Billboard Tropical Chart, contained the hits “Entre Familia”, “Tiemblo”, “Me Muero Poe Estar Contigo” and “Solo Mía”, and earned Viti the Puerto Rico Diplo Award for Orquesta Prometedora. The following year he released Viti At Work, which rose to the #2 album chart spot with the hits “Fuego” and “Quiero Amanecer Con Alguien”. His third album spawned the hit songs “Me Tienes Sufriendo” and “Solo Tu” and his brother Frankie produced his fourth album Cara Bonita. Since his brother’s death in 1998, Viti has kept the spirit of his brother’s music alive by performing some of Frankie’s hits like “Desnúdate Mujer” and “Viajera” during his concerts. In 2012 Viti was honored by New York City’s Dominican community with an award for 25 Años de Trayectoria Musical. Ruiz’s most recent album is 2013’s Una Nueva Vida.

YOLANDA RIVERA was born in Ponce, Puerto Rico and her family moved to New York City when she was a child. Her first break was in 1969 as a singer in Willie Rosario’s band. She returned to Puerto Rico in 1975, performing with several orchestras before joining La Sonora Ponceña in 1977. She sang on eight albums before retiring from the band in 1984 to raise her family. Returning to La Sonora Ponceña in 1995, she participated in that year’s recordingApretando and the orchestra’s 45th Anniversary album Y Seguimos Haciendo Historia five years later. The following year she was invited by Ray Barreto along with Adalberto Santiago, Tito Allen and Ray de la Paz to perform on the album Rey de las Manos Duras. In 2009, Yolands received the Puerto Rico Salsa Award in recognition of her musical career. Her most recent release is 2013’s La Hija del Guaguancó, a fiery album of “pure salsa autentica.”