LEHMAN CENTER FOR THE PERFORMING ARTS presents
A Sizzling Evening of Salsa! 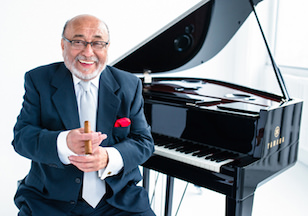 Lehman Center for the Performing Arts is on the campus of Lehman College/CUNY at 250 Bedford Park Boulevard West, Bronx, NY 10468. Tickets for EDDIE PALMIERI & FRIENDS on Saturday, September 17th, 2016 at 7:30pm are $60, $55, and$50 and can be purchased by calling the Lehman Center box office at 718-960-8833 (Monday through Friday, 10am–5pm, and beginning at 12 noon on the day of the concert), or through online access at www.LehmanCenter.org. Lehman Center is accessible by #4 or D train to Bedford Park Blvd. and is off the Saw Mill River Parkway and the Major Deegan Expressway. Low-cost on-site parking available for $5.

EDDIE PALMIERI, known for his charismatic power and bold innovative drive, has a musical career that spans over 50 years as a bandleader of salsa and latin jazz orchestras. The honorary Doctor of Music from Berklee College of Music has been awarded nine Grammy Awards. His recordings have become classics with such hits as “Muñeca,” “Vamonos Pa’l Monte,”“Puerto Rico,” and “Azucar Pa’ Ti” which has been included in the National Recording Registry of the Library of Congress.Born in Spanish Harlem, he started piano studies at an early age and began his career as a pianist in the ‘50s with Eddie Forrester’s Orchestra. He spent a year with Tito Rodriguez before forming the legendary Conjunto La Perfecta in 1961. With an infectous sound, Palmieri’s band soon joined the ranks of Machito, Tito Puente, Tito Rodriguez and other leading orchestras of the day. His discography includes over 36 titles, of which nine have received Grammy Awards, including Best Latin Album forThe Sun of Latin Music (1975), Unfinished Masterpiece (1976), Palo Pa’ Rumba (1984), Solito (1985) and La Verdad(1987). He received both a Grammy and a Latin Grammy award for Obra Maestra/Masterpiece (2000) with Tito Puente, the Best Latin Jazz Album Grammy Awards for Listen Here! (2006), and Simpatico (2007), a collaborative effort with trumpet master Brian Lynch. His album Sabiduria! (Wisdom), a fusion of jazz, funk and Latin with Afro-world rhythms had its World Premiere at Lehman Center for the Performing Arts in 2013. Also in 2013, Palmieri was honored with the National Endowment of the Arts Jazz Master Award and the Latin Academy of Recording Arts & Sciences’ Lifetime Achievement Award.

EMILIO MORALES is a master pianist who graduated in 1977 from The School of Music at the National Schools of the Arts in Havana, Cuba where he is currently a professor. He has performed world-wide, has worked with the Buena Vista Social Club Project and Café Vista Alegre Cuban Project (directed by the famous tres guitar player Pancho Amat) and frequently accompanies Grammy Award-winner Omara Portuondo, one of Cuba’s leading female vocalists. In 1988, Morales performed at NYC’s Beacon Theater with Opus 13 as part of the historic and groundbreaking Tropicana Review tour of Cuban musicians and dancers from the famous Havana, Cuba nightclub, the Tropicana. An accomplished Latin jazz composer and arranger, he is considered one of the most innovative and exciting pianists in Cuba. His latest CD is Con Cierto Tumbao, recorded with his band Los Nuevos Amigos.