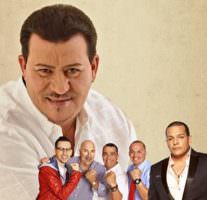 Lehman Center for the Performing Arts is excited to present TITO ROJAS with special guests PUERTO RICAN POWER under the direction of LUISITO AYALA performing together for the first time in New York on Saturday, August 15th, 2015 at 8pm. The young Puerto Rican salsa vocalist YAN COLLAZO will also make a special appearance. Produced by Lehman Center and José Raposo.

Lehman Center for the Performing Arts is on the campus of Lehman College/CUNY at 250 Bedford Park Boulevard West, Bronx, NY 10468. Tickets for TITO ROJAS on Saturday, August 15th, 2015 at 8pm are $65, $55, and $50 and can be purchased by calling the Lehman Center box office at 718-960-8833 (Monday through Friday, 10am–5pm, and beginning at 12 noon on the day of the concert), or through online access at www.LehmanCenter.org.  Lehman Center is accessible by #4 or D train to Bedford Park Blvd. and is off the Saw Mill River Parkway and the Major Deegan Expressway. Low-cost on-site parking available for $5.

TITO ROJAS was born in 1955 in Puerto Rico and began his musical career in the 1970’s, recording his first album with Pedro Conga y su Orquesta Internacional. Known as “El Gallo Salsero” (The Salsa Rooster), he became the lead vocalist with Conjunto Borincuba, led by Justo Betancourt, releasing the hit album Con Amor in 1978. In 1983, Rojas joined the Salsa orchestra PUERTO RICAN POWER as lead vocalist and had hits with the salsa versions of the ballads Noche de Boda and Quiereme Tal Como Soy. Going solo in the early ‘90s, Rojas regularly released well received new records including Condename (1992) containing the popular songs Porque Este Amor, Condename a Tu Amor and the album A Mi Estilo (1994) that featured the hits Tambien Nos Duele, He Chocado Con La Vida and Señora De Madrugada and reached number 8 on the Billboard Tropical/Salsa chart. His fourth album Por Propio Derecho (On My Own Right, 1995), a combination of tangos, Cumbias and ballads went double Platinum, won Rojas the Paoli Prize for “Best Salsa Artist of the Year” and included the hits Esperandote, Llorare, Claro and Te Quedaras Conmigo. In 1999, Rojas released his number one hit Por Mujeres Como Tu from the album Alegrias Y Penas which reached #2 on the Billboard Tropical/Salsa chart. His most recent record Independiente was released in 2011.

PUERTO RICAN POWER was founded in the early 1970’s by bassist Jesús “Chuy” Castro. In 1978, LUISITO AYALA, a native of Humacao, Puerto Rico, who had been playing trumpet for several years in the band of Willie Rosario and Willie Rodriguez, took over as the orchestra’s Musical Director. After signing with Fania Records the following year, Puerto Rican Power accompanied a number of famous Salsa artists including Celia Cruz, Cheo Feliciano, Ismael Miranda, Héctor Lavoe and Paquito Guzman. With the addition of TITO ROJAS in 1983 as lead vocalist, the orchestra developed a form of music now known as Salsa Brava. Their 1987 release Canta Tito Rojas was a smash hit, climbing to #13 on the Billboard Tropical/Salsa chart and contained hit songs like Noche de Boda, Quiereme Tal Como Soy, Tres Mujeres and No Estoy. The release of A Donde Iras, included on the 1992 album Con Todo El Poder, brought the band international recognition despite Tito Rojas’ departure to pursue an independent career. The orchestra has regularly released successful albums, including Men in Salsa containing the huge hit Tu Cariñito and the smoldering Wild, Wild Salsa with the hot songs Pena de Amor and Me Tiene Loco. Their November 2014 release, Somos el Poder, features Tito Rojas (among other guest artists) on the song Homenaje a Braulio.

YAN COLLAZO is a vocalist that was born in San Juan, Puerto Rico, whose father was a musician. After singing with the merengue bands El Grupo Karis and Jossie Esteban y la Patrulla 15, he moved to Columbia to join the Orquesta  Guayacán recording hits like Carro de Fuego, Extraño tu Amor and Mujer de Carne y Hueso on their 2010 Grammy nominated album Bueno y Mas. He then joined the Columbian salsa supergroup Groupo Niche where he specialized in the group’s songs that had been recorded by Tito Gomez. Going solo with the album Valio la Pena Esperar, he had a big international hit Cállate and won the 2012 Borinqueña Paoli Award for New Salsa Artist of the Year. Callazo’s second album Homenaje a Mi Idolo was released in 2013 and contains 12 of the late Tito Gomez’s most emblematic hits including Nuestro Secreto, Las Mujeres Están de Moda and Fue Tan Fácil.