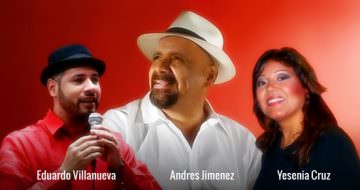 Lehman Center for the Performing Arts is proud to present UN ESPECIAL A LAS MADRES with “El Jibaro” Andrés Jiménez and his entire band, plus the young voice of La Trova, Eduardo Villanueva and special guest Yesenia Cruz on Saturday, May 16th, 2015 at 8pm. Produced by Lehman Center and José Raposo.

Lehman Center for the Performing Arts is on the campus of Lehman College/CUNY at 250 Bedford Park Boulevard West, Bronx, NY 10468.  Tickets for UN ESPECIAL A LAS MADRES on Saturday, May 16th, 2015 at 8pm are $50, $45, and $25 | Children 12 and under: $10 for any seat, and can be purchased by calling the Lehman Center box office at 718-960-8833 (Monday through Friday, 10am–5pm, and beginning at 12 noon on the day of the concert), or through online access at www.LehmanCenter.org .   Lehman Center is accessible by #4 or D train to Bedford Park Blvd. and is off the Saw Mill River Parkway and the Major Deegan Expressway. Low-cost on-site parking available for $5.

ANDRÉS JIMÉNEZ, known as “El Jibaro”, is a self-taught singer, trovador and composer that was born in 1947 in the mountainous town of Orocovis in central Puerto Rico. One of 15 children, his father was a farmer and Jiménez grew up in a hard working family that enjoyed singing the Catholic rosaries and traditional Puertorriqueño folk music. Moving to New York City at age 17 for economic reasons, he was soon drafted into the army and was sent to Vietnam. After completing his service, he enrolled at the University of Puerto Rico and joined the nationalist student music group Taoné, who combined social protest lyrics with the typical folk musical traditions of the Borinquen. Over the decades, his music has come to define música jíbara, or the music of the poor mountain people and “El Jibaro” has been honored with the Diplo, Farándula, Tu Música and Agueybaná Puerto Rican music awards. Despite having recorded more than thirty albums, many of which went Gold, his records have been difficult to locate outside of Puerto Rico. This started to change with the release of A los Santos Inocentes in 1997, which sold more than 50,000 copies. In 1997 Jiménez collaborated with Faccundo Cabral on the album América Canta and with Ismael Miranda in 1999 on Son de Vieques. By 2007, his recording Mi Parranda hit #12 on the Latin Tropical chart and was Billboard’s 2008 Tropical Album of the Year, ironically in the category of New Artist. His next two recordings Desde Mi Balcon (2009) and Plena Con Lelolai both reached the #8 position on the Latin Tropical Album Chart. His latest release, Llorens, came out in 2014.

La Trova EDUARDO VILLANUEVA is a rising young Puerto Rican Folklorista, one of the few balladeers skilled in décima, a style of sung poetry that is composed of ten lines of octosyllabic rhyme in one harmony, rich in metaphors, similes, personifications and figurative language. At a young age, Edurado was able to demonstrate such a unique talent for singing, composing and improvising that he started to win trovador competitions throughout the country, including the Instituto de Cultra Puertorriqueña contest, which he won the first of three times at age 17, the youngest ever to do so. Eduardo has been a featured artist in concert with El Gran Combo, Olga Tañón and Andrés Jiménez amongst others. His compositions have been recorded by prominent artists such as “El Topo” Antonio Cabán Vale, Danny Rivera, Tony Croatta and on El Pico De Oro – Homenaje A Luis Miranda, the 2005 Latin Grammy-nominated Best Folk Album. As a recording artist he has released several albums including Trova 2004 Cuéntame un Cuento… Abelardo with Arturo Santiago and three with his brother Ricardo Villanueva: La Cañona – Quique Domenech y Los Hnos. Villanueva (2010), Soy Boricua me Quedo Con el Ron Caña (2011) and De la Muerte Hasta la Vida – En Vivo (2012).

YESENIA CRUZ is a highly regarded singer of Puertorriqueño folk music. She earned the title of Trovadora by winning more than 30 folk singing competitions between 1984 and 1989 in her native Puerto Rico. By the age of 17 she was traveling to New York and Chicago to conduct music workshops in the public schools. A well known vocalist, she has extensively performed both at home and abroad. In 1999 she recorded the album El Encuentro with Walito Irizarry and the late Tony Croatta and also debuted her self-titled first album Yezenia Cruz. Her most recent release is Llévame Contigo (2011).