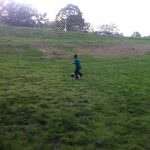 As the world brings their attention to London for the 2012 Summer Olympics here in The Bronx we want to wish Bronx native John Orozco an overflow of blessings in his quest for the gold.  While it seems we won’t catch live coverage of the Opening Ceremony we will get to see it later on this evening when many of us will eagerly look for our flags, the USA along with many of our countries of origin. In the mean time here in The Bronx day there are a few things you can do to get into the Olympic spirit this weekend.

Dust off the bike, if you haven’t already done so, and check out the Bronx Bike Map to set your course. Maybe a ride along Mosholu Parkway towards Van Cortlandt Park or along Bronx Park East, just be sure to check out the greenways here in our borough (As for me, I’d make sure to make a pit stop by a park with sprinklers for a quick cool down 🙂   Not much of a bike rider, go for a jog or a brisk walk through the beautiful parks here in The Bronx or get up early tomorrow and step into a forrest at the New York Botanical Garden.   And while you’re there check out Monet’s Garden, not only will you see his art in flowers but  you will also get the opportunity to view two paintings never publicly exhibited in the United States before.  Since we are speaking of arts, get your heart rate going with Tai Chi Chuan at Wave Hill, don’t worry they have beginners and intermediate levels.

Now for aquatic activities, if you chose the bike path along Pelham Parkway you can make your way to Orchard Beach.  There is also canoeing at Pelham Bay Park (Bruckner Blvd & Wilkinson Avenue) with trained Urban Park Ranger to lead you into the adventure.   If these activities are not sparking the olympian in you, maybe check out St. James Family & Friends Day for some healthy eating tips, shape up classes and other family activities.  In the mood for a competitive adventure? find your way to St. Mary’s Recreation Center for the Indoor Triathlon.

As you can see, there are plenty of things to do here in The Bronx so keep an eye on the Bronx Happenings calendar of events and follow Bronx PR on twitter:@Bronx_PR and Facebook.com/BronxPR.