Not long ago I saw a Facebook posting from a friend who expressed that some young people don’t really understand how much The Bronx has improved. While I cannot claim to have been born here, I traveled to this borough during some of its less attractive years before permanently relocating.  In my humble perspective living in The Bronx is no longer what it once was.  I will not share how old I was during my first visits to this borough or my age when I moved here, but I did get to hear the broken messages in the graffiti filled trains. I saw abandoned buildings and watched from my window as suspicious individuals would come in and out a hole in a broken down concrete wall meant to seal the front of the empty building.  It may not have been a scene straight out of “The Warriors” but it wasn’t much too far from it.

There was a time when our Bronx was flourishing with the development of luxurious apartments, entertainment and shopping areas along with an influx in population. You know, that time  years ago when the Grand Concourse was built to be the Champs-Élysées of The Bronx and attracted many people to our borough.  But after the Great Depression and World War II things spiraled downwards. From a time of growth and promise our beloved borough declined to a point where “The Bronx is Burning” identified our borough.  Today you may call me optimistic, but as I see it, we are back in a period of growth and promise.  Living in the only borough connected to the mainland is not undesired, even the New York Times reported that more people are moving into The Bronx than leaving.

From where I’m standing our borough has a great blend of urban living with plenty of open land to explore. 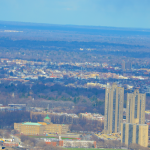 Whether you live in an apartment building or a house you have the opportunity to enjoy nature in your backyard, neighborhood park, garden or even forest.  With the cultural diversity of this borough there is no shortage of places to go for dinner and drinks.  As a hub of artistic talent, The Bronx can boast of galleries, theaters and many other performing arts stages where you can enjoy high caliber performances. If you’re looking for other things to do, there are numerous organizations, cultural institutions and businesses that host public events.  And I don’t mean lackluster events; I’m talking about fun family friendly Bronx events that build a strong sense of community.  We have also seen a number of developments taking place in our borough with the goal of boosting economic growth.

While I’m not pretending that there isn’t plenty of room for improvement, I dare say once again we are entering a period of growth.  Being a Bronxite is not just about living in The Bronx it’s about Bronx Lifestyle; a lifestyle of community pride, art, music and culture.