Adam Levine-Peres is using the video-sharing website YouTube to broadcast an inside view of The Bronx by focusing on its people.

The Bronx is an ever evolving borough, from its flourishing beginnings to the tumultuous years, the borough is once again rising; and it has much to do with our people.  While a lot of the tv focus continues to be on the negative, Bronxites like Adam have made it a point to bring to your computer screen an inside look of The Bronx and its people.  It may not be mainstream television but more than 1 billion unique users visit YouTube each month (Source: YouTube Statistics) and if they are lucky they will come across Project Bronx.
What makes Project Bronx so special, well it’s about The Bronx! It is also real, funny and it provides a transparent look at the people of our borough.  Bronx-PR reached out to Adam Levine-Peres to learn a little more about Project Bronx and here’s what he had to say…

Q: When did Project Bronx start and how?
It started as an idea cultivated during the week of hurricane Sandy last year. I am a public school teacher and during Sandy most public schools were closed, so as a result of being copped up in my place for a week straight, the idea for Project Bronx was born!

Q: Why Project Bronx?
Because I love the borough, I love the people and our multi-cultural atmosphere. However, in the media, the Bronx and it’s residents are grossly misrepresented.

The Bronx was once a symbol of urban decay, many decades ago; however, the media can’t seem to shake the image of filthy streets and abandoned buildings.

My personal opinion as to why the Bronx gets a “bad rap” is because we are the only borough with a majority “non-white” population, meaning the Bronx is over 60% people of color, maybe that has something to do with the skewed media perception. Oh snap, did I just go there?!

Q: I imagine stopping people on the street to ask questions can bring out some very interesting reactions, any that stand out as the funniest/oddest/etc? (If on video, can you share the link?)
Most people usually just stop and say “Oh my God, it’s News 12 the Bronx” & I always have to say “na, we’re not…we’re better” just kidding of course. in this promo, you will see 2 Lehman College students flubbing the “you are watching Project Bronx” they kept saying it wrong.  Watch here~> https://www.youtube.com/watch?v=acN-SVoD-QQ&list=PLIt_WLARxpDgdiFGFqteQFi_7j3N_9bpt

A little about Adam:

Q: When you are not going around interviewing people in The Bronx, what are you doing?
When I’m not doing my Project Bronx thing, I’m teaching my high school students, preparing instruction, grading and also enjoying life with my family and girlfriend.

Q: How would those who know you best describe you?
Intense, charismatic and indecisive.

Q: What do you like best about living/working in The Bronx?
I live and work in the Bronx!
I love teaching students that come from many different parts of the borough and it makes me proud to serve my community.

Q: Describe The Bronx to someone who has never been here before.
The Bronx has a lot of history and character. It has been home and continues to be home to a smorgasbord of races and ethnicities from European Jews & Italians to Puerto Ricans & Dominicans.

Q: Is there something you would like people to know about Project Bronx that was not addressed by the questions above? Feel free to include.
Project Bronx will be Hosting a Fundraising event on friday May 30th for China Exchange, which sends 6-8 Bronx high school students to China for 2 weeks to learn about the country and culture.  More details on Bronx Happenings Calendar ~> Fundraiser: The Marble Hill Exchange Program 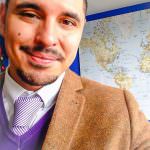 Adam Levine-Peres is 27 year old, born and bred Bronxite. Adam is the creator and host of Project Bronx. He is a Bronx enthusiast and community builder. Adam is also a special education public school teacher in the Bronx. As an educator he not only works with Bronx youth on a daily basis, but he encourages his students to reach their full potential while being a role model for them.
Check out Project Bronx  Youtube Channel
Follow on twitter @ProjectBronx