Recently I was walking around Central Park with some friends, as we looked around the beautiful green backdrops one of my friends expressed how he should go there to run.  My response as the non-runner that I am was, why would you come all the way over here to run? His response was simply that it was nice there. Of course I had to reply to that, there are plenty of nice places in The Bronx to run.  And seeing that you are reading this post you probably have an idea of what happened next.  As I am not a runner, I reached out to the folks that would know a bit more about running and places to run here in The Bronx; among them NYC Parks, NY Botanical Garden, Friends of Van Cortlandt Park, the Van Cortlandt Track Club and the New York Road Runners (NYRR), some of them actually responded so here’s what I found out. 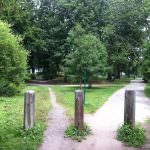 To find out more about running at Van Cortlandt Park I reached out to Bette Clarke, President of The Van Cortlandt Track Club.  Now there’s a group that really loves running.  The club is open to runners of all levels and experiences from beginners to competitive and marathon runners. They have group runs on Saturday mornings that anyone is welcome to attend, they also have track workouts on Tuesday evenings, and tempo runs Thursday evenings.  For new runners they recommend beginning with the Saturday group run and those who want to work on speed or other personal goals are encouraged to attend the track or tempo runs in order to work with the coach to obtain preparation tips. Bette described Van Cortlandt Park as, a treasure, with something for everyone, from the hilly, challenging cross country course to the “flats”, the Putnam and other trails.  This is a very special year for the Van Cortlandt Park as they are celebrating 100 Years of the Cross Country Trail with the Run for the Trail Series B’Ramble 10K/5K Run.  This inaugural race is taking place on Sunday, September 1st starting at 10am.  This race is to celebrate the anniversary of our historic cross country course here in The Bronx and to raise funds to continue maintaining another of the jewels of our borough.  To register for this race visit, http://www.vctc.org/page/riverdale-b-ramble-10k.

But wait there’s more! There are other places in The Bronx where you can go for a run.  The wonderful folks at the New York Road Runners (NYRR), who by the way are gearing up for the ING New York City Marathon, also recommended the following locations here in The Bronx:

So you see, you don’t have to go far in order to get a nice run in The Bronx. Keep in mind that wherever you chose to run it is important be

to take personal safety precautions. Be aware of your surroundings, run in well lighted areas and if you happen to be directionally challenged as I am (get lost even with GPS), make sure to let somebody know where you’re running.  Now go out there and enjoy the end of summer or gear up for a run in the crisp fall weather right here in The Bronx.

Note:
*Regarding at NYBG: access to the grounds is free all day on Wednesdays and 10-11am on Saturdays, I believe there is a grounds only pass available if you’re just interested in running but I did not get confirmation from the garden so you will have to contact them directly.